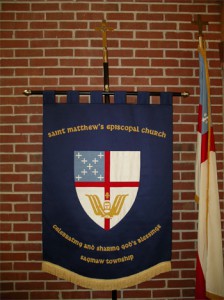 St. Matthew’s Episcopal Church is a small and friendly group of Christians who gather to worship following the 1979 Book of Common Prayer.  Our congregation began as a mission in 1954 during a period when there was rapid growth within the Church and when Saginaw Township was just beginning to grow.  Services were originally held in the old Saginaw Township Hall.

We have been at our present location since building a “parish hall” on this corner in 1956. The building was turned into a worship area during the ‘60s and the present parish hall on the west side of the church was added in the ‘70s.